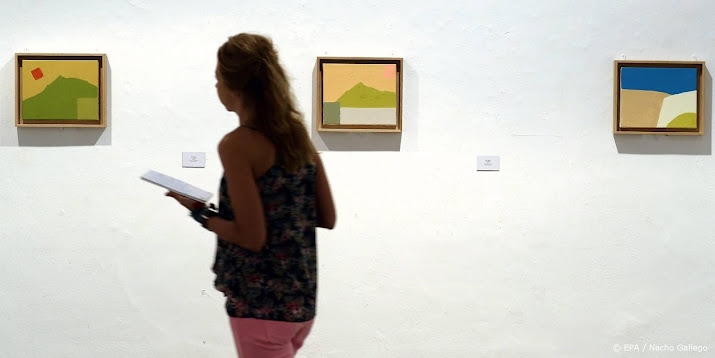 Until her death in November, the Van Gogh Museum was in regular contact with the Lebanon-born artist Etel Adnan to talk about life, her work and Vincent van Gogh. The famous painter was a great inspiration to her. Adnan’s own words now form “the backbone” of the first retrospective of her work in our country, says curator Sara Tas.

The ‘Kleur als Taal’ exhibition, which opens Friday in the Amsterdam museum, shows 78 works, 72 of which have never been seen in the Netherlands before. The colorful paintings are linked to ten works by Van Gogh (1853-1890). The focus is on the connection that both artists felt with nature, their intense use of color and the role of language in their lives and work.

Etel Adnan (1925-2021), daughter of a Syrian Turkish-speaking Muslim father and a Greek Catholic mother, was born in Beirut. Later she lived in the United States and France, among other places. Adnan began her career as a poet and writer and took up painting at the age of 34. Her mixed cultural background and her diverse living environments have influenced her work, according to the museum. She found a universal language with colors instead of words. “’Colors make visible what that person is trying to say, but silently,’ said Adnan. Her work is read and exhibited worldwide.

The artist became acquainted with Van Gogh’s work while studying in Paris. “When I first saw Van Gogh’s work, it was a huge shock to me,” she said. “I was from Beirut and had never even seen reproductions of art – we had no museums in Lebanon.” The self-portraits especially touched her. “I was impressed that someone could look at themselves with such precision, such intensity, almost unbearable. That shock never passed.”

The exhibition is on view until September 4.