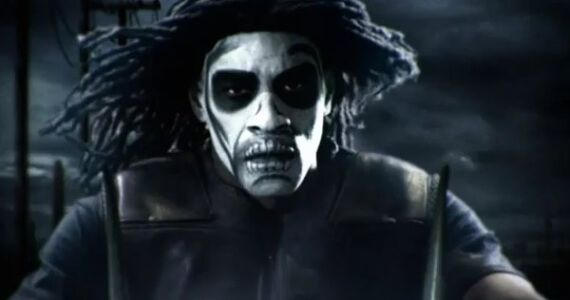 Apparently ‘Twisted Metal’ will have some serious story to go along with vehicular carnage. Check out the reboot’s brand new version of death himself, Mr. Grimm.

With the growing number of rebooted properties and next-gen revivals that seem to be popping up, it’s fitting that Twisted Metal should be among them. Aside from being one of the more memorable games from the original PlayStation, the fact is that there just arent’ as many vehicle combat games as there should be. But in case anyone thought that the upcoming Twisted Metal would be a simple sequel, the latest trailer for one of the most recognizable characters in the series shows how much is being revisited and re-imagined this time around.

The character in question is of course Mr. Grimm, although it might not be apparent from the above image. Over the course of the series the character has been known as a supernatural being, the Grim Reaper, Mr. Grimm, Grim; you get the idea. For the upcoming game though, the developers at Eat Sleep Play have thrown off the typical depiction of the man as the embodiment of death, and come up with a much more human take.

While the new, face-painted Mr. Grimm may have a much more personal reason for inflicting as much pain and insanity upon the world as possible, his methods haven’t changed too drastically. The new trailer shows that the bike, flaming chainsaw, and all around ridiculousness that Twisted Metal is known for are still present. In the case of the Brothers Grimm, larger and louder than ever:

Whether Twisted Metal will actually be including a pair of monster truck-driving Grimm brothers, or if the mention is strictly referring to multiplayer isn’t completely clear. What is evident is that the car transformations seen in the Sweet Tooth trailer aren’t limited to the maniacal clown.

While the attacks and over-the-top styling of Twisted Metal are sure to get gamers’ blood pumping, it remains to be seen whether or not it will be enough to sell well. These days a multiplayer title has to be as balanced and in-depth as possible to be more than a flavor of the month, and even though Twisted Metal has helicopters, solid game types are just as important as vehicles.

From what’s been shown of the various new game modes it seems the developers are aware of that fact, and creator David Jaffe’s distaste for online passes is certainly refreshing. The name of the game these days is keeping players from tossing your game aside after a few weeks, and in the case of Mr. Grimm, a more interesting or believable backstory could help players feel invested. We’ve liked what we’ve played of the game so far, so we’re willing to wait and see how the changes turn out.

What do you think of the more human version(s) of Mr. Grimm? Think the new character is more or less interesting than the soul-devouring reaper of past games? Leave your thoughts in the comments.

Twisted Metal will be released on February 14, 2012 exclusively for the PlayStation 3.