SpiderMan Whatever Happened to the Smythes and the SpiderSlayers – DNews 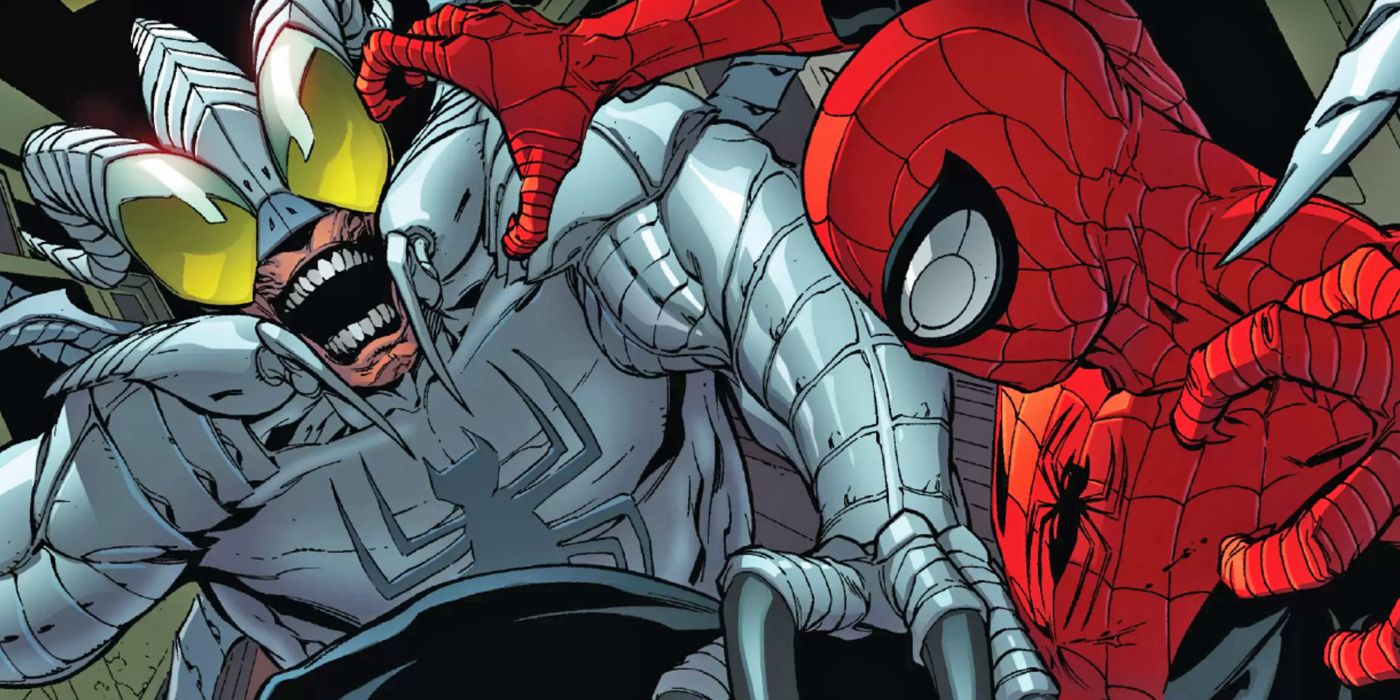 Spencer and Alistaire Smythe and their Spider-Slayers are classic Spider-Man villains who handed Peter Parker one of his worst losses.

You Are Reading :SpiderMan Whatever Happened to the Smythes and the SpiderSlayers

Between Venom, Doctor Octopus and the Green Goblin, Spider-Man has some of the most famous villains in comics, but the Smythes and the Spider-Slayers aren’t usually near the top of any list of Peter Parker’s most fearsome foes. Still, inventors Spencer and Alistair Smythe and their robotic Spider-Slayers menaced Spider-Man for decades. They also had outsized roles on Spider-Man: The Animated Series, a pillar of Saturday morning cartoons in the ’90s.

While the Smythes haven’t been around in the comics for some time, they were one of Spider-Man’s most tenacious protagonists for years and provided many memorable moments. Now, we’re taking a look back at what happened to these classic Spider-Man villains and their robotic creations. 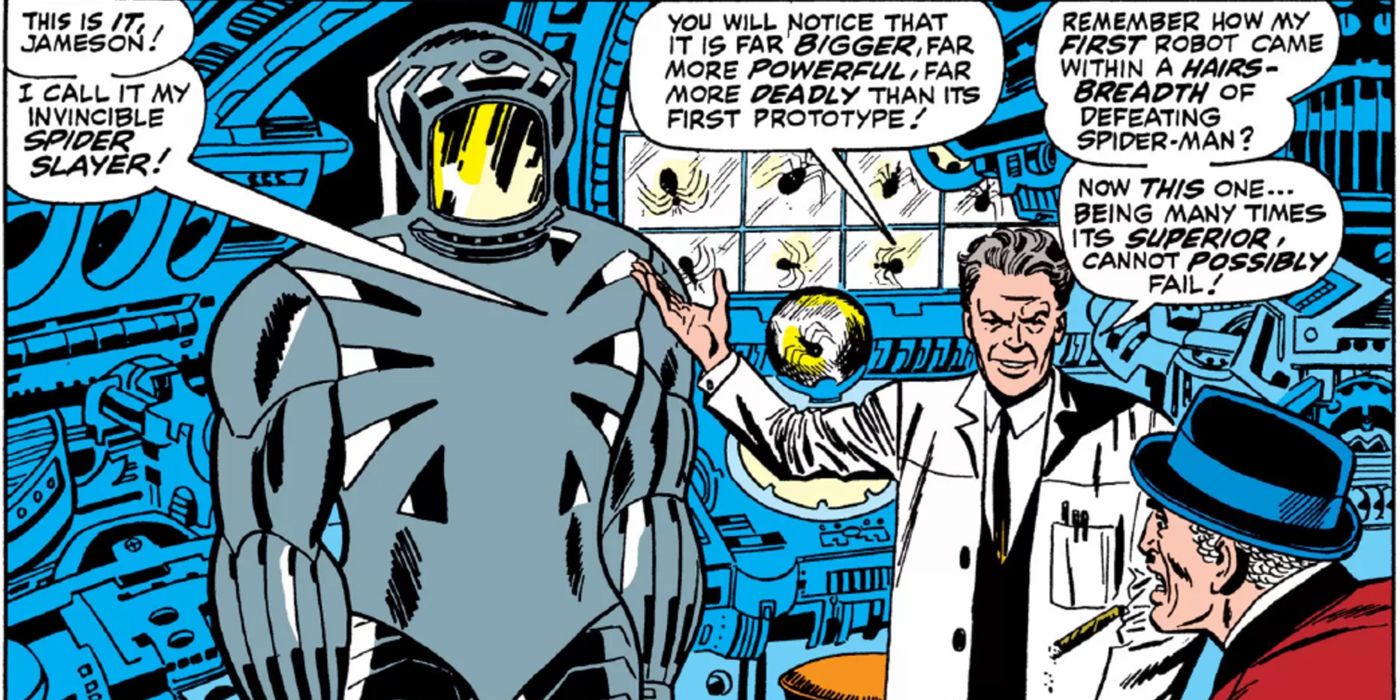 By the time Stan Lee and Steve Ditko created Spencer Smythe in Amazing Spider-Man #25, the inventor had already read one too many Daily Bugle articles about Spider-Man being a menace. He convinced J. Jonah Jameson to fund the original Spider-Slayer project to create Spider-Man hunting robots, but Jameson cut off funding when those machines failed to capture Spider-Man. Defeated and angry, Smythe became obsessed with killing both Spider-Man and J. Jonah and turned to a life of crime to fund his robotics. Many of his robots contained radioactive materials and he eventually succumbed to radiation poisoning. In one last desperate attempt to kill them both, he chained them both to a bomb. In Marv Wolfman and Keith Pollard’s Amazing Spider-Man #192, He dies thinking he had killed them both, but Peter defuses the bomb in the knick of time.

Although Spencer was dead, his son Alistair inherited his father’s robotics knowledge, along with his hatred for Spider-Man and J. Jonah Jameson. After he debuted in Louise Simonson and Mary Wilshire’s Amazing Spider-Man Annual #19, he picked up right where his father left off and started designing new, deadlier Spider-Slayers. His designs were incredibly formidable and hunted Spider-Man in packs, but Alistair’s tactical brilliance made them far more dangerous.

Over the years, the Spider-Slayers robots went through several design evolutions. Spencer’s original designs were fairly rudimentary and had a classic science-fiction feel to them, but Alistair’s Later designs had more flair and arachnid features. The Spider-Slayers featured in Spider-Man: The Animated Series were giant robot spiders and scorpions that deployed advanced weapons like rocket pods and lasers blasters. They even had the ability to combine like a giant insectoid/arachnid Megazord. 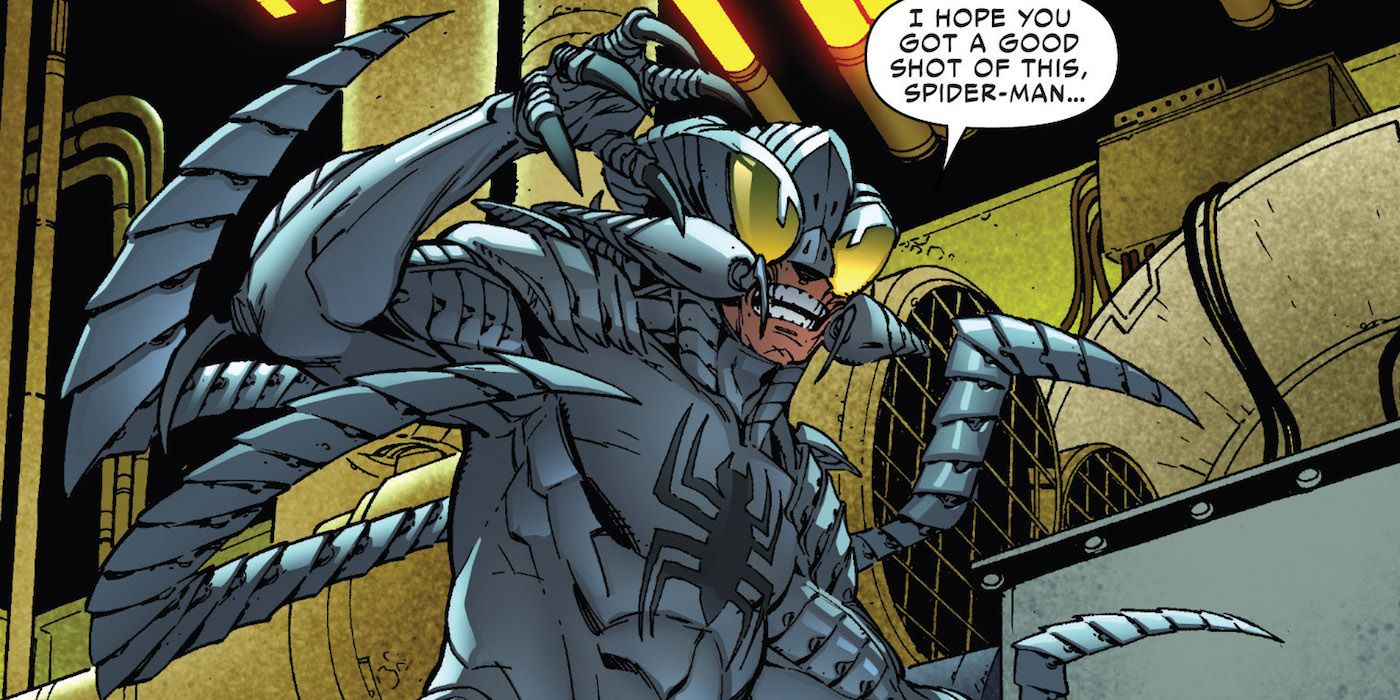 However, all of those pale in comparison to Smythe’s ultimate engineering feat, the Ultimate Spider-Slayer. After a series of defeats, Alistair drastically rethought his approach. He completely ditched the drone style slayers for something a bit more invasive. He wrapped his entire body in a highly advanced biological exoskeleton that gave him metahuman abilities. He instantly gained super strength, speed, agility, and reflexes. It also came equipped with sharp claws, articulate shoulder blades, and web-shooters that could keep up with Spider-Man. Despite all of his upgrades, he still fell short of Spider-Man on more than one occasion.

In 2011’s Amazing Spider-Man #654, by Fred Van Lente and Stefano Caselli, Smythe left a lasting legacy on Spider-Man’s corner of the Marvel Universe when he killed Marla Jameon, J. Jonah Jameson’s wife. Peter Parker took the death incredibly hard, viewing it as the latest in a long line of mistakes in the field. While Jameson didn’t blame his wife’s death on Spider-Man, Smythe’s actions left a lasting psychological scar on the web-slinger.

Despite the success of that attack, Alistair never fulfilled his father’s legacy by killing Spider-Man or Jameson. When Alistair was set to be executed for the murder of Marla Jameson, he summoned a fleet of Spider-Slayers to free him. With Doctor Octopus posing as Spider-Man and in control of Peter Parker’s body, Otto Octavius countered all fo Smythe’s high-tech attacks and killed him by impaling him on one of the spikes of his armor in Superior Spider-Man #13, by Dan Slott, Christos Gage and Giuseppe Camuncoli.

Although Norman Osborn briefly used the Spider-Slayers in his doomed plans and the Smythes were both resurrected through clones, neither of the Smythes nor their creations has played an essential role in Spider-Man’s life for some time now. Despite that, the threat of the Smythe’s creations continues to loom on Peter Parker’s horizon, waiting for the perfect opportunity to strike.