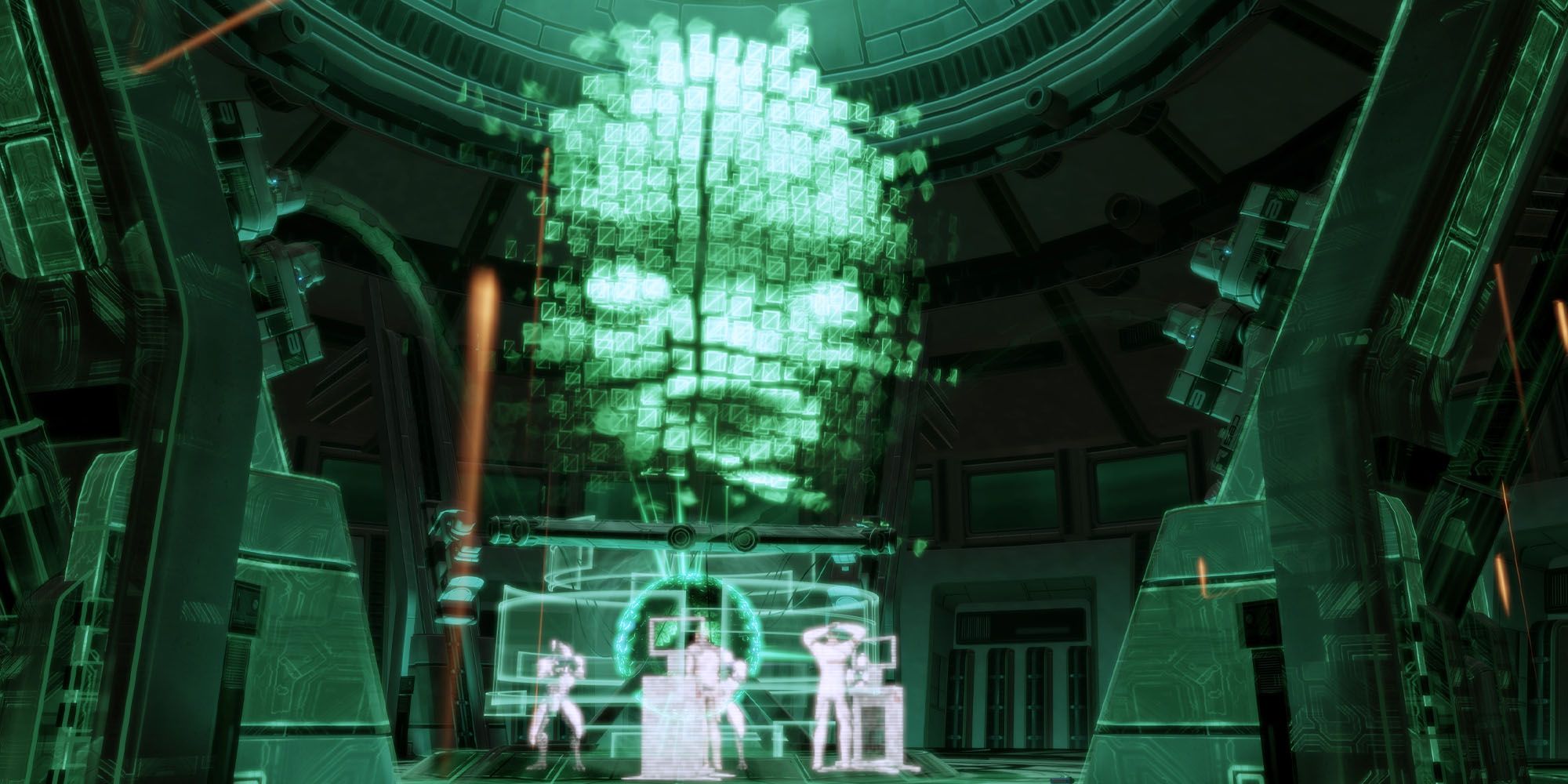 When a Cerberus experiment goes rogue, it’s up to Commander Shepard to get to the bottom of the mysterious VI running rampant through the galaxy.

Commander Shepard winds up deep within Cerberus territory during Mass Effect 2, exposing the player to an organization willing to go to any means if they thought it gave humanity an advantage. The Illusive Man sent Shepard to investigate a Cerberus base where an experimental VI had gone rogue; upon arrival, they were instead met by heavy Geth presence.

Dr. Gavin Archer, the sole survivor of the project, guided Shepard to the source, but it was a long, arduous journey across four facilities to break the VI’s hold and end the threat once and for all. The Project Overlord DLC deployed the M-44 Hammerhead hover-tank, which was used to explore hostile worlds, and put Commander Shepard face to face with a moral decision with the power to truly define their character. Once players initiative the Overlord missions, it’s not possible to return to the Normandy until Project Overlord is completed, though there are opportunities to change squadmates. 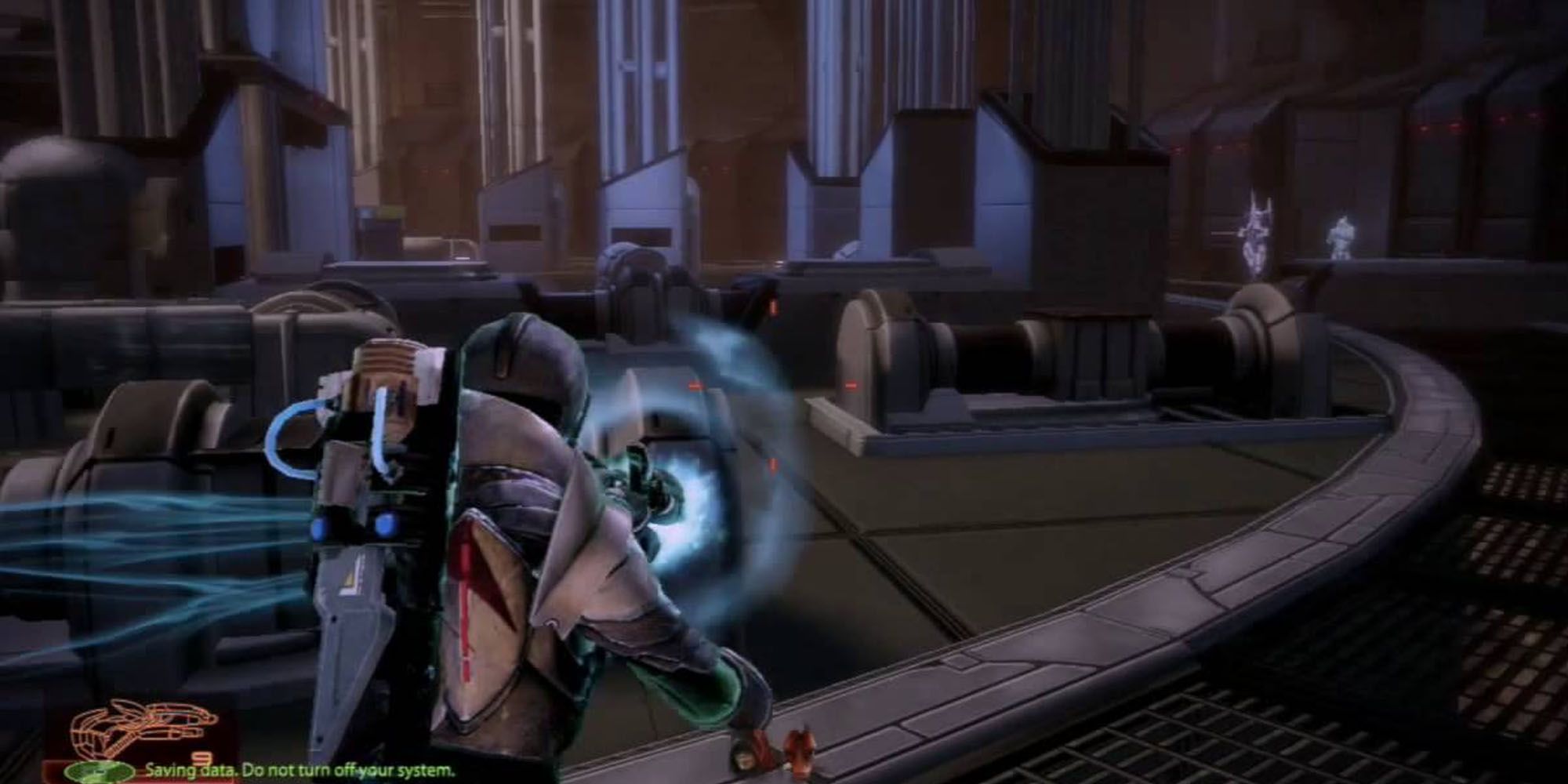 Arriving on Aite, Shepard and crew drop down to the surface in the M-44 Hammerhead hover-tank to investigate. Shortly after arriving, Dr. Gavin Archer will explain the situation and ask Shepard to retract the transmission dish to stop the VI from uploading its data into systems off-world. Before going inside the facility, grab the Palladium crate next to the Hammerhead and the power cells in the alcove on the left. Enter the facility and speak to Archer, who appears on the monitor.

Finish speaking with Archer and head toward the security desk. Shoot out the glass window behind it and head into that room to grab a med-kit, Archer’s datapad notes and a Cerberus terminal worth 1125 credits. Proceed through the door on the right to find another of Archer’s logs and the controls to retract the first dish. This prompts a response from the computer and the rogue VI, which sounds like it’s speaking in Geth language. Archer confirms that Shepard will have to destroy the antenna outside to prevent it from transmitting off-world.

Head through the unlocked door and toward the tram. Grab the PDA worth 525 credits and head to the lower level passageway leading into the mess hall. There are multiple Geth targets here, so place squadmates strategically and take cover to begin taking them out. Once the first wave is defeated, remain in cover as the next one arrives quickly and contains more difficult enemies, like Destroyers and Rocket Troopers. Wipe them out and head into the cafeteria to find 450 credits in the cash register and a med-kit, then grab the power cells from the room behind the kitchen before heading back upstairs to grab another one of Archer’s logs in the room up there.

Proceed across the walkway into the waiting area to grab another med-kit and some credits, then follow into the tram into the next area, keeping an eye out for Geth after arriving. Battle through and check the area for loot before grabbing ammo and going up into the satellite dish’s base. Fight the Geth while moving around the dish, taking out the support struts to destroy it. Once it’s disabled, speak to Archer for a situation brief. The VI is fortified at Atlas Station, so Shepard will need to travel to Prometheus and Vulcan stations to override it before heading to Atlas. 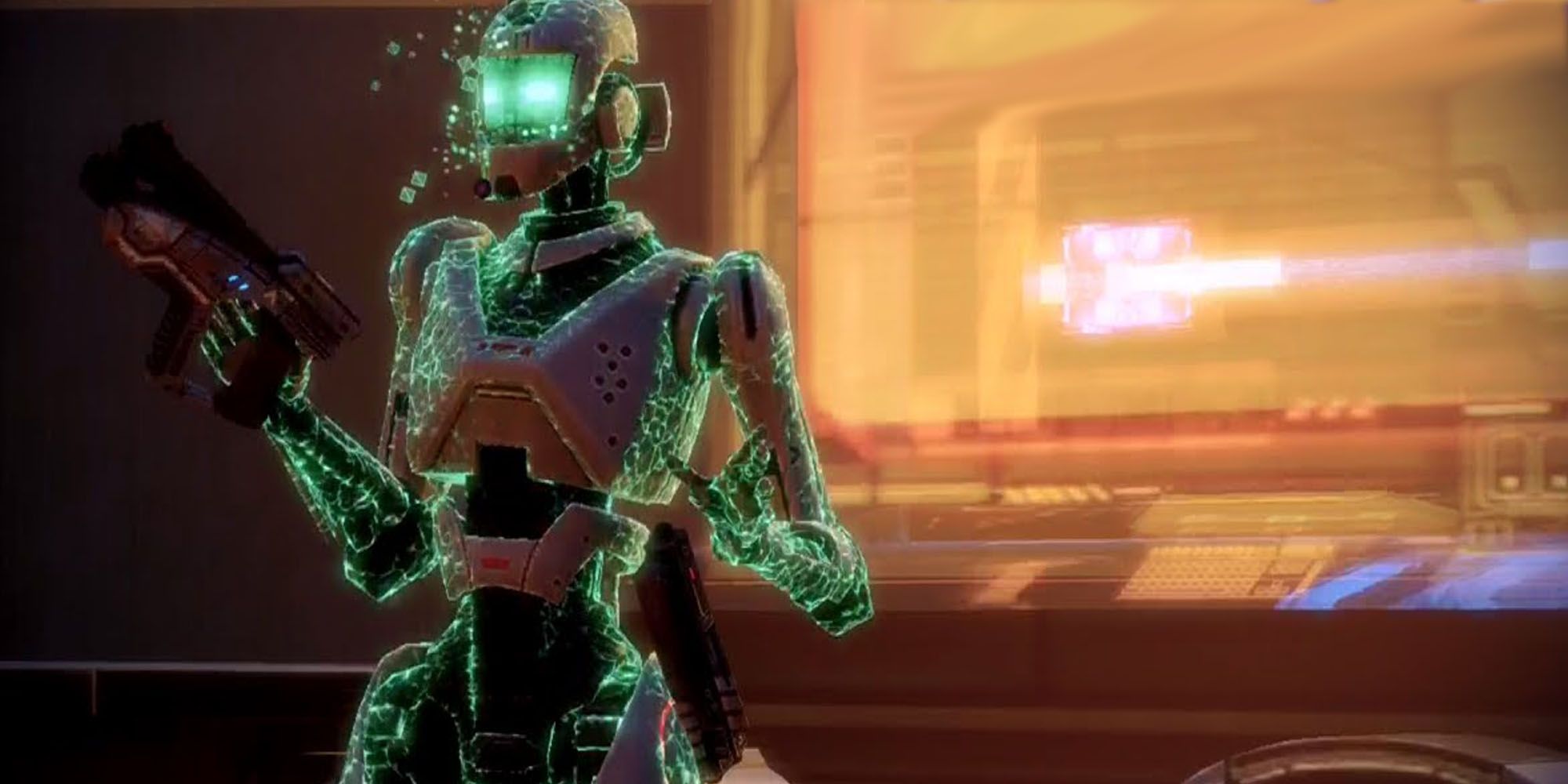 Following the arrow prompts and distance meter in the lower right corner, head to Vulcan station first. Vulcan station is located inside a volcano, so navigating the hazardous area requires caution and careful maneuvering. Dropping the Hammerhead down in lava will cause immediate damage and eventual mission failure if unable to get out of the lava.

Avoid the turrets along the travel path if possible, though they can be shot down if done carefully. Follow the navigation arrow through the volcano, proceed down the rock path, and jump across the lava, relying on the stone floating in the stream. The stone will begin to sink once the Hammerhead touches down, so move quickly onto the next one until reaching the other side. Arriving at the outpost facility, use the steam vent to lift the Hammerhead to the next area. Explore the area carefully, as there are some interesting finds, but watch out for turrets. Head down to the next stream, traveling up it along the debris to reach the station.

Exit the Hammerhead and prepare to fight through a host of drones and LOKI mechs to reach the upper level. Outside the area the controls are located, there’s a massive battle with mechs, drones and a YMIR mech. Proceed carefully, focusing first on the drones and then shifting fire toward the LOKI and YMIR mechs. Once they’ve all been defeated, head into the control room and override the controls. Leave the station and begin the journey to Prometheus. 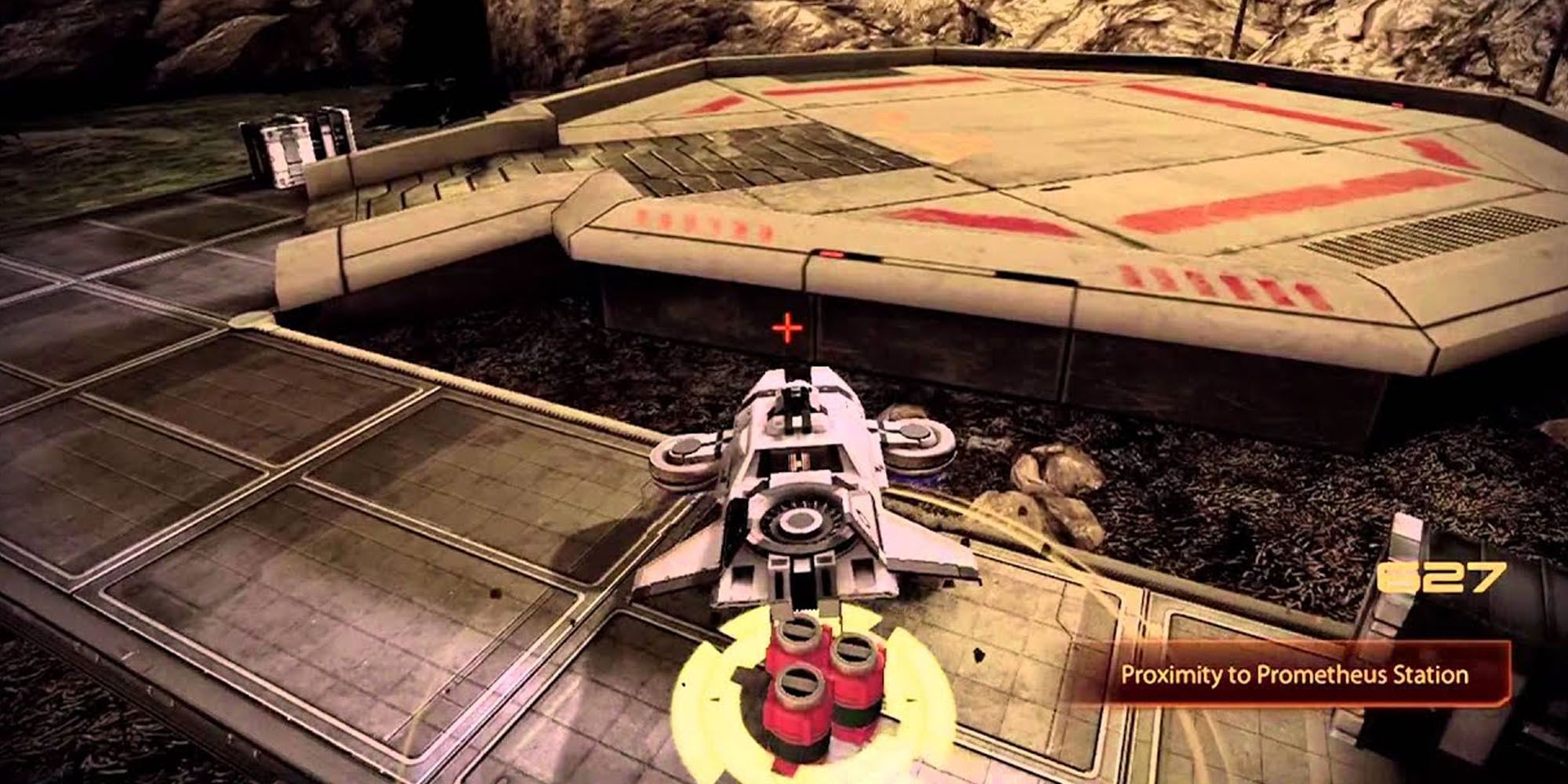 Following the navigation arrows to Prometheus, Archer explains it is a downed Geth ship and heavily fortified. A shield surrounding the ship will need to be taken down before the station can be entered. Carefully maneuver the Hammerhead around the area, taking out shield generators while avoiding the targeting laser. If positioned properly, the laser will take out the generators while trying to eliminate the Hammerhead, making the job a little easier. Once all four targeting lasers have been destroyed, the shield drops to head inside the facility.

The ship’s interior houses inactive Geth. Follow the open pathway, picking up loot and checking out any logs available along the way, until reaching the control center. Activating the controls requires rearranging the dock pieces leading to the other side of the room. To solve the puzzle, move the middle piece up two spaces. Select the small piece on the left, moving it right one space, then up one space. Cross the bridge created to activate the controls, then head back to the puzzle. Move the long left piece right one space, then select that last moveable piece, moving it right one space, up one space and right one more space.

Cross the bridge to the command center. Before accessing the terminal, there is a med-kit to grab and a laptop to hack worth 1875 credits. Activate the override. In retaliation, the VI activates the Geth in Prometheus Station, meaning Shepard and crew will have to fight their way back to the Hammerhead. 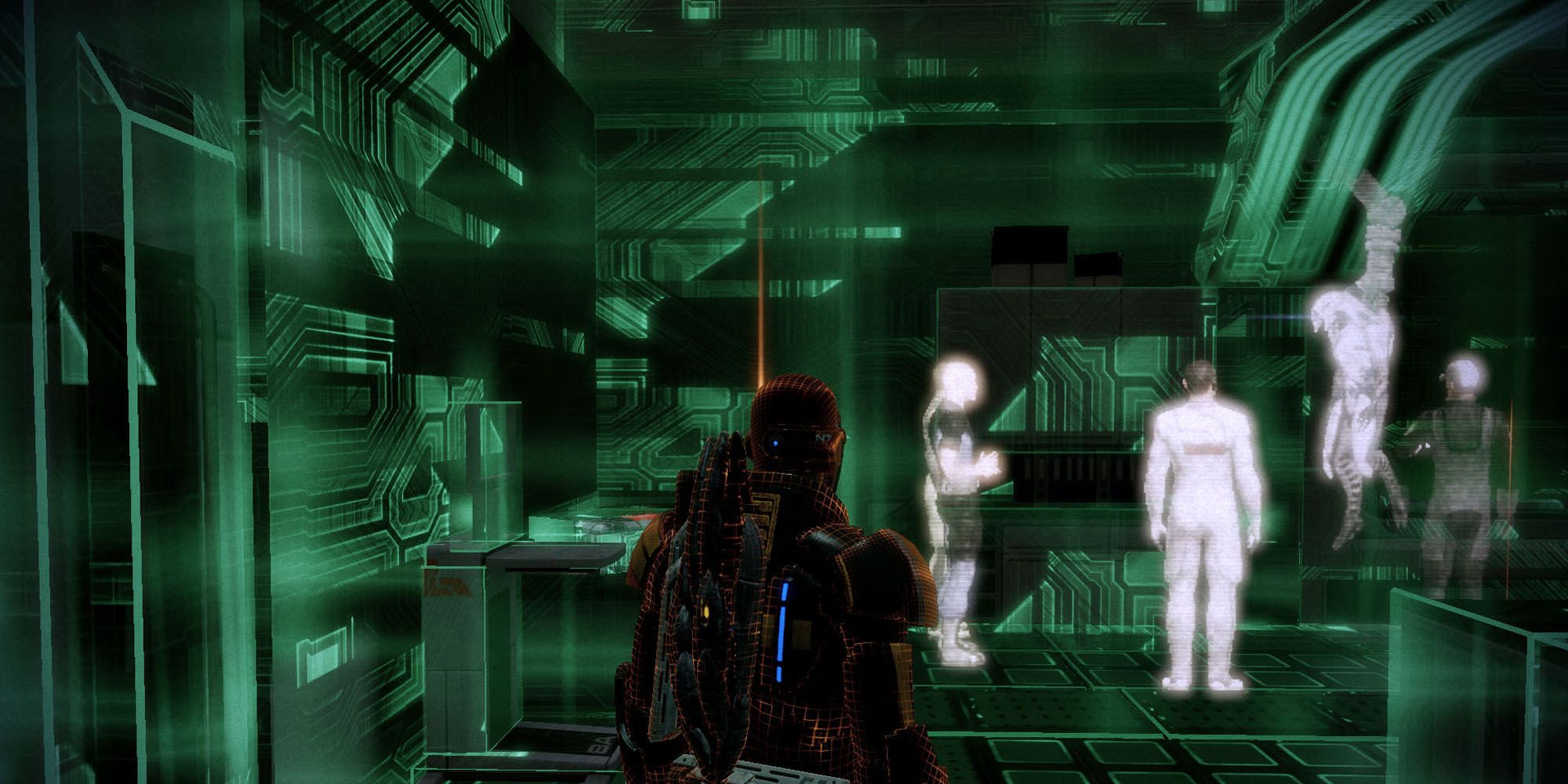 Leave Prometheus station and head back toward the area with the waterfall to locate Atlas station. Approach the door and proceed down the hallway until reaching the bottom of the ramps. Head through the door on the left and summon the elevator, which has been damaged and can only move in increments of two. To reach level 7, call the elevator to level 4, then go upstairs to activate the console, which will move it three more floors. Geth Troopers and a Prime will exit the elevator car; clear them out, then take the elevator, which crash lands at the bottom of the shaft. In the next room is another of Archer’s logs, Palladium, a computer that can be hacked for 2250 credits and a Geth to scan for the Heavy Skin Weave upgrade. Further down the hall, access the control panel. The VI hacks Shepard’s implants and Omni-tool, which separates them from the rest of their squad and leads through a series of David Archer’s memories in virtual reality.

These memories can be accessed one by one and reveal that David’s autism and deep understanding of complicated mathematical sequences made it possible for him to communicate with the Geth in their own language. Once finished, take out the three Geth in the adjoining room and hop the wall to grab the med-kit and a wall safe with 2250 credits. Proceed to the end of the hallway, where there is another elevator full of Geth. Once they’ve been eliminated, grab any nearby loot and head into the elevator to meet the VI on the lower level. 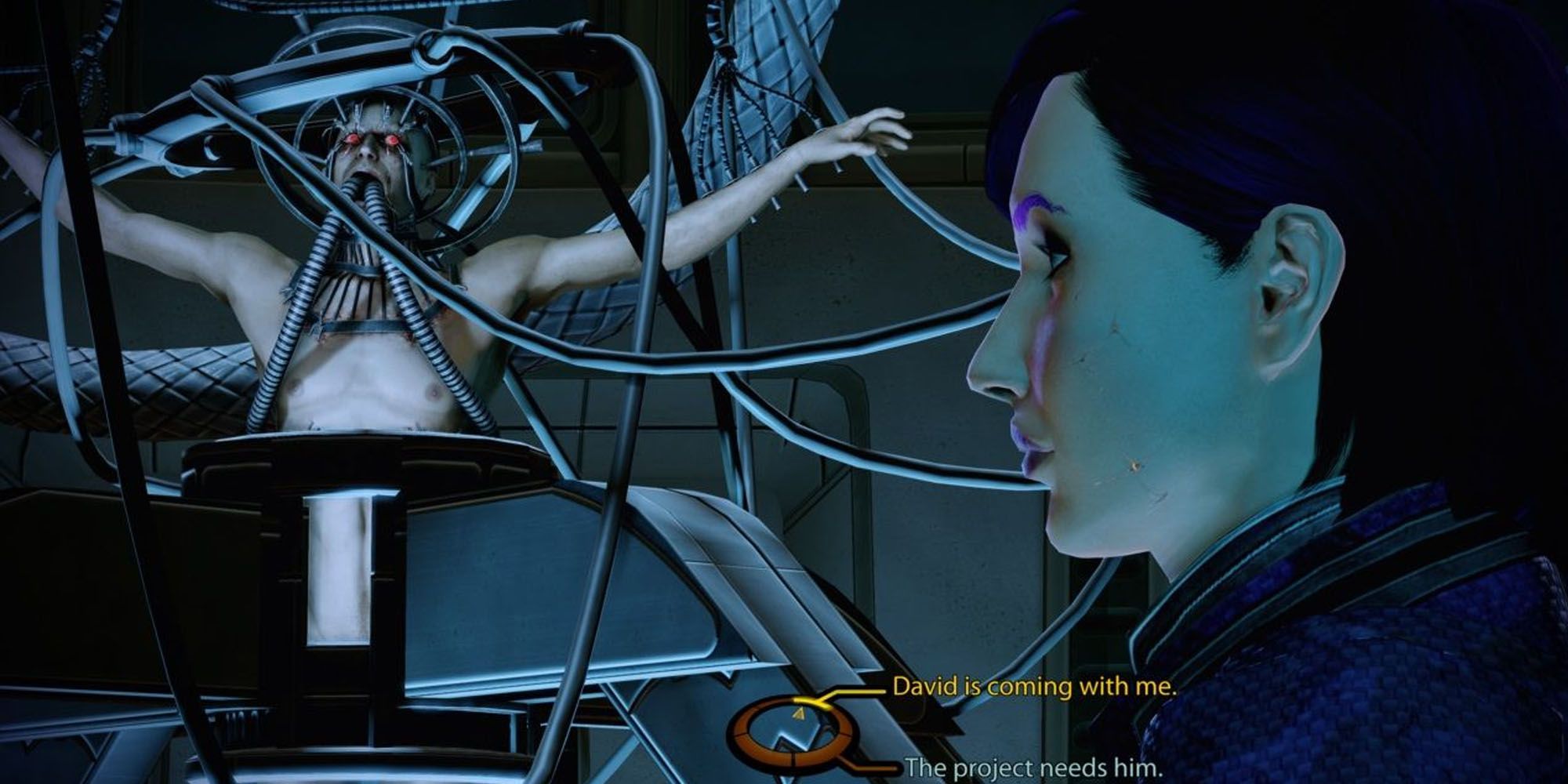 Shepard finds the machine David is trapped in upon reaching the bottom, followed quickly by David’s attempt to upload himself into the orbiting Normandy SR-2. Shepard will need to target the VI nodes traveling down David’s cables before they reach the ends to stop the upload. There will also be numerous Geth enemies in this area to interfere with the task.

Carefully move around, taking out the nodes and keeping an eye on the upload bar in the lower right corner. If it reaches 100%, it’s game over. After eliminating all the nodes, Shepard gets their first look at the horrors David has been subjected to. Gavin Archer rushes into the room and defends the horrors of his project. Shepard faces the morality choice of taking David away to safety at Grissom Academy (Paragon) or leaving him with his brother to continue the research hoping that it will help against the Reapers (Renegade).

If Shepard takes David away, Archer will fire his weapon, at which point a Paragon Shepard is given a chance to hit him with their gun. Renegade Shepard has the opportunity to punch him, nonetheless. Depending on Shepard’s actions, they will receive an outcome-specific email from the Illusive Man.