How to Build a Deskbot Deck in YuGiOh! Duel Links – DNews 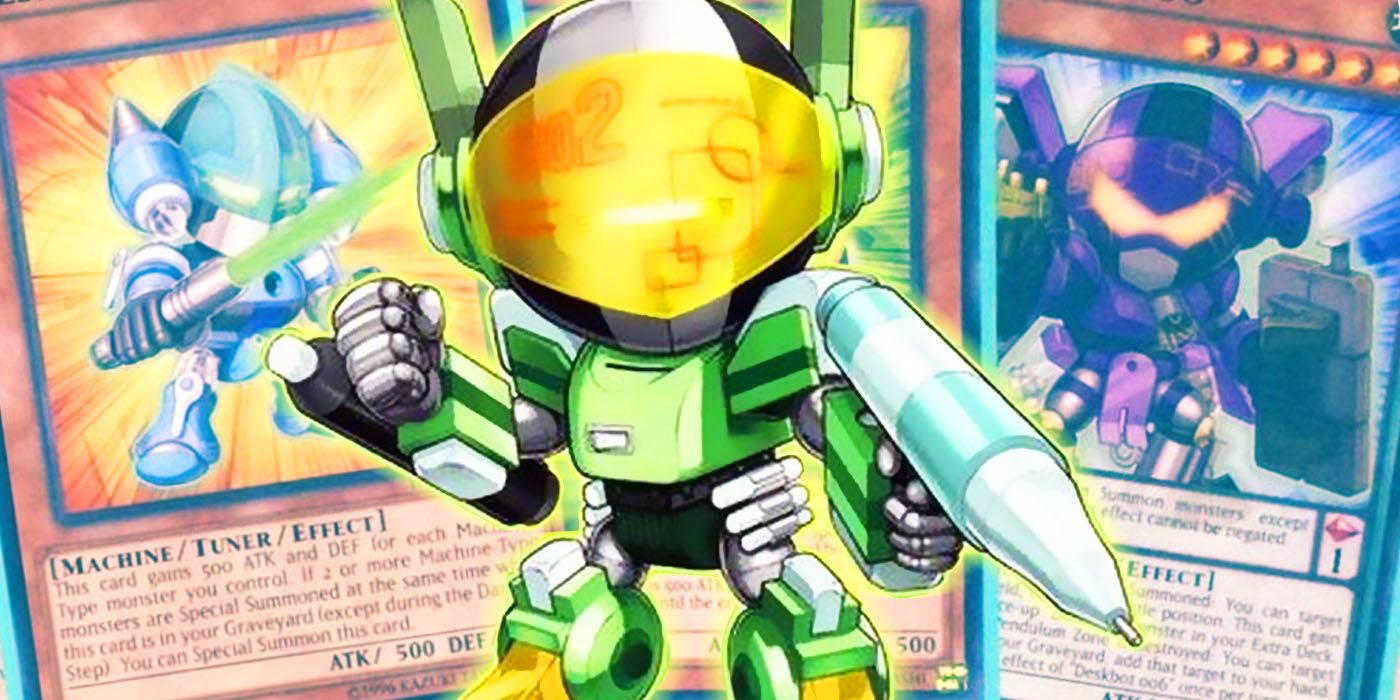 Thanks to the Maximum Gustav box, Deskbot decks finally have access to all of their main deck cards to fulfill their purpose of swarming the field.

You Are Reading :How to Build a Deskbot Deck in YuGiOh! Duel Links

With the introduction of the Maximum Gustav box to Yu-Gi-Oh! Duel Links, players are finally able to get their hands on the complete Deskbot Archetype. These decks excel at swarming the field and supporting one another to power past their opponents. Thanks to their Pendulum monsters, Deskbot 005-008, these decks have a host of new abilities to get the upper hand against their opponents.

The original Deskbots in Duel Links, Deskbots 001-005, 009, as well as their Synchro monster, Deskbot Jet, and their field spell, Deskbot Base, were released in the box Warriors Unite on March 31, 2019. They were reprinted alongside the new Pendulum monsters on Feb. 28 with the release of Maximum Gustav for players to buy. Unlike regular Yu-Gi-Oh!, Duel Links allows players only 20-30 cards in their decks, 4000 life points to start with and only three zones each for monster and non-field spell/trap cards. 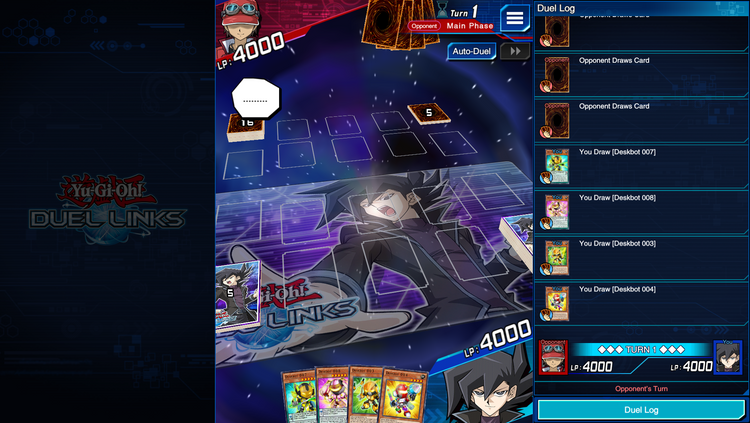 With ten different main deck cards, if players wish, they can have a full 20-card deck by simply playing two copies of each card, though this isn’t always the best way to build the deck, as it limits extra plays. Due to this, it is important to know which Deskbots to use. The utility of many of the Deskbot monsters changed wildly moving into Duel Links, so keeping in mind which ones to use is vital.

Starting from the top there is Deskbot 001 which, as the only Deskbot Tuner monster. It allows players to go into Deskbot Jet if they wish too, both of which grow stronger the more Deskbot cards are on the field, though this is likely the only real reason to use Deskbot 001. Jet also allows one to sacrifice their monsters to summon others or to destroy a card on the field. 002 not only buffs other Deskbot monsters on the field, if they are special summoned, it allows the player to search for one Deskbot card from their deck and add it to their hand. Mix this with Deskbot 003 which allows one to special summon a Deskbot monster from the deck upon being normal summoned, and they create a consistent engine for the deck.

The other non-Pendulum monsters are Deskbots 004 and 009. Once per battle 004 allows the player to discard a monster from their deck to give Deskbot 004 500 ATK and DEF for each level the monster was. However, the opponent won’t take any damage for the rest of the turn, though being able to get up to 5000 ATK is nothing to scoff at and is one of the better Deskbot effects. Finally, there is Deskbot 009 which pairs well with 004 as it is a level nine monster and allows one to add all the ATK of Deskbot monsters on the field to 009. It is the only monster able to attack if one uses this ability. 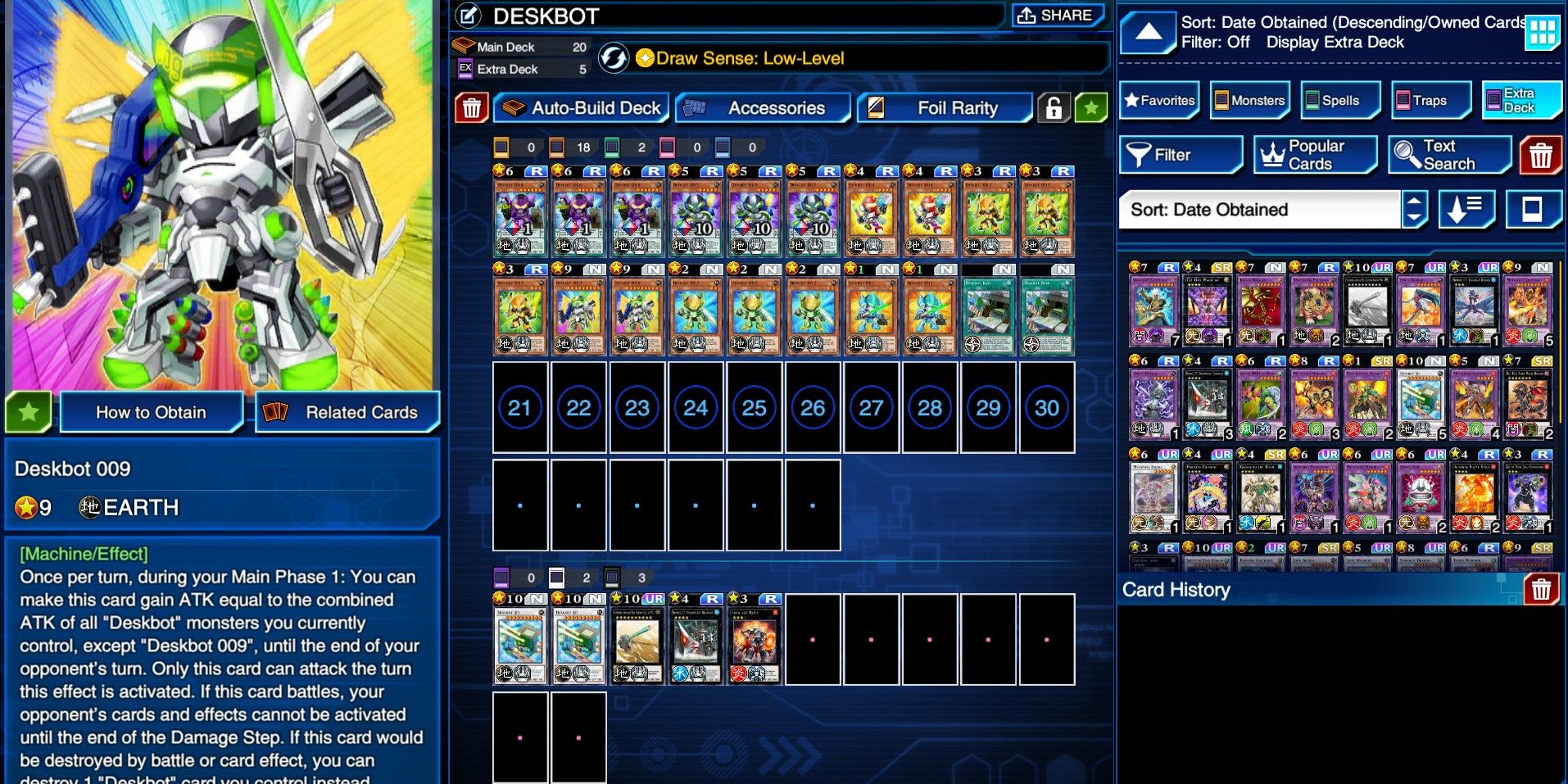 Deskbots 005-008 are all Pendulum monsters with a scale of either one or 10, though they make it so the player can only Pendulum summon Deskbot monsters. On top of this, they each have a unique effect if summoned to the field. Deskbot 005 and 006 allow one to destroy a spell or trap on the field or change the position of one monster, respectively. 007 and 008 grant protection to other Deskbots from battle or card effects, but they are overshadowed by 005 and 006 as they don’t do enough on their own in Duel Links.

The final card in the archetype is Deskbot Base which gives 500 ATK and DEF to all Deskbot monsters, and also has two effects that occur once per turn. One allows the player to return all Deskbot cards in their hand to the deck and then redraw the same amount. The other allows one to banish nine different Deskbot monsters from the field and graveyard to force the opponent to shuffle their hand, graveyard and all cards on their side of the field into their deck.

By far the most consistent of the cards in Duel Links are 002-004, 009 and Deskbot Base. 002 and 003 allow for amazing search potential, and mixed with Deskbot Base’s ability to redraw cards, they combine to create a high level of consistency. This consistency allows for 004 to come out easily and act as a hard wall against an opponent that can’t destroy it by a card effect. Two to three copies of each of these cards should appear in a Deskbot Deck, alongside one or two of Deskbot 009 for usage by 004. If choosing to use their Pendulum monsters, Deskbots 005 and 006 are the best options as they provide opportunity to target an opponent’s cards and allow for a more consistent OTK (One Turn Kill), which is the name of the game when playing Deskbots.